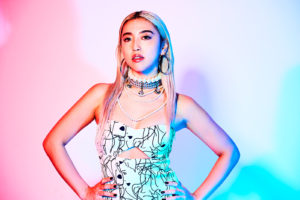 ALISA UENO, who is well known worldwide as an artist, DJ, and model, announces collaboration with the one of the most popular Austrian DJ units, Wild Culture.
For ALISA UENO, this is a collaboration following the 2017 Grammy nominated song “Best Friend / Sofi Tukker” and the 2018 “IS THAT IT / ALISA UENO & Vigiletti”.
Wild Culture was fascinated by ALISA UENO’s talented creativity and unique character in her voice, and this collaboration was realized.
ALISA UENO co-produced “Killer Queen”, which is full of out-of-the-box pop-sense that transcends genres and regions, and participated as a singer. This song will be released worldwide on August 28th throughout the world.
ALISA UENO is now fully focused on her solo project and plans to release her works from late 2020 to 2021.

<ALISA UENO comment>
I was super excited when I had this offer because I haven’t worked on music production for a while. I fell in love with this song since I listened to it for the first time. Wild culture’s track was cool and also the voice of French Pirates was strong and cute. I’m really happy to be involved in this project. On the production side, I devised not to break the world-view and strong message in the song. This project has been on for a year, so I’m excited for everyone to listen to this song.

<Wild Culture comment>
The idea of “Killer Queen” came to light during other song sessions. The session wasn’t going as expected, and Queen’s song during a break taught us how difficult the music business environment could be. It’s a double-edged sword. One is very useful and the other has the feeling of being dropped by a promise of lies. The “Killer Queen” came from this idea.”Killer Queen” is straight music and no one betrays when the results don’t go as expected. The motto of the song is to keep fighting.
Alisa is an great artist with an amazing characteristic in her voice. Her writing & lyrics style totally fits to Killer Queen, because she gives the song a special twist and uniqueness. We are super happy to have this talent and super nice human person on our Single “Killer Queen” and are happy to work with her on several new songs.

<ALISA UENO Biography>
In 2009, while she was a university student ALISA UENO started her DJ career. She has acted in summer beach music festivals like Electric zoo and domestic music festival like Electrox, and also she has acted in well-known clubs in Japan and overseas. Other than her main act performances, she performed opening acts for NERVO (NO.1 female DJ on DJ MAG TOP100), AFROJACK , DIPLO and LIL JON. She also worked with artists like STEVE AOKI and Charli XCX. In 2017 she joined a tour for world-famous samurai guitarist MIYAVI as a back DJ, and she performed at numerous music festivals. Including her performances at fashion brand FENDI and beauty brand YVES SAINT LAURENT BEAUTE’s events she performs more than 120 times a year. From 2016 she was selected as Night Ambassador of Shibuya 4 years in a row, and she was also selected as the Life of party for Japanese dance music scene.
In 2015 she joined NERVO’s “Hey Ricky” as a featuring artist and debuted worldwide as a singer. After that in 2017, she joined Sofi Tuckker’s song “Best Friend feat. NERVO, The Knocks & ALISA UENO”. This song which she joined as a songwriter and featuring artist was on TOP 100 US (Hot100) single chart for 5 weeks in a row. She is the 8th Japanese person and 3rd Japanese solo fe-male artist of all time to be on this record. Furthermore, this song was used as global TV commercial song of Apple ”iPhone X”, underwear brand Triumph’s TV commercial song, soundtrack of the video game “FIFA18” and also was used as background music for the movie “Ocean’s 8” and so on. In addition, the song was NO.1 on iTunes Dance chart for 26 countries, and it was also NO.1 on Japanese SHAZAM chart. It’s the most popular song right now. ALISA grabs floor’s atmosphere with her talented music choice and energetic vibes. She travels all around the world with her fluent English skill, and creates new art by mixing up a variety of culture, music, fashion. She is the true artist “ IT GIRL ” Representing Tokyo. Through her unique hairstyle, make up, and world standard DJ career, she entertained many races with her performances. With her global fan base, her success is greatly anticipated.

<Wild Culture Biography>
Flo and Felix’ shared history started back in 2012 when they met at a party each booked as a DJ. At that time, both organized their own events in the areas surrounding Tyrol and Vorarlberg.
Their paths had often crossed but never truly merged together. During that party, the night they met, the two got into a long conversation and realized they had a shared vision of a music project that pushes genre boundaries. They then made plans to set up a studio session the day after. Flo, hangover and with little money left in his pocket, showed up at Felix’ apartment and the two began exchanging song ideas and thoughts.
They produced their first track quickly and officially decided to start a joint project. Wild Culture was found as a name to represent their expression of the freedom and courage to use a wide range of elements across genres and to combine cultural borrowings from all music periods. The musical style that came from this experimentation shaped the duo’s Electro-Pop sound and brought them into the Deep House/Techno scene at the time.
Later, the renowned German Deep-House label Kittball Records became aware of the Austrian duo and started publishing their music in 2013. In 2014, the first major success with the “Fade” EP saw them gain international recognition and amassed millions of streams. It also opened the door for worldwide bookings and in a short amount of time Wild Culture began touring across the globe – from Australia to Europe to South America and the USA. This strengthened their status as one of the most sought-after Austrian duo producers. This intensive phase brought about a time of further development for Wild Culture, which was shaped by multicultural influences but also by personal experiences, which they later expressed in songs like “See You Again”.
With successful releases such as “the Tide” EP, major labels began taking an interest in them in 2015. Then, in 2016, their song “Sugar” developed into their most successful single to date with over 10 million streams, airplay in Germany and Austria and reached the dance charts in the USA
After further songs involving featured artists such as Chu and Ramon (Nihils) as well as remixed versions by YouNotUs and Purple Disco Machine, Flo and Felix realised they wanted to expand their horizons and release music more independently involving other artists, so they founded their own label named Wilderness Records.
The single “Together Alone” was very well received in the streaming world and was remixed by LeShuuk. In 2019, the duo reinterpreted the hit “2X” by the Austrian pop star Mathea, which racked up over 4 million streams very quickly. Two more singles followed until the beginning of 2020, when they released “TIL YOU KNOW” – their latest single made it into the Top20 of the Airplay charts in Austria.
The change from a deep house act to a dance-pop duo was created, but the call for freedom and musical development was not satisfied and so dissolved. Flo and Felix started in 2020 a new beginning with a new live concept and the development as one of the most interesting electronic pop duos.

< French Pirates Biography>
Kristine Bogan, American songwriter and performance artist, flew from her long time base of New York City, to start a new life in Berlin in October 2016. Now a proud member of the SONY ATV team, Kristine has achieved success in her German songwriting career, writing and releasing music with artists, songwriters and producers all over Europe (i.e. Kelli-Leigh, NOSOYO, Charming Horses), even achieving first runner up status at the Unser Lied fur Israel: Eurovision Song Contest in 2019.